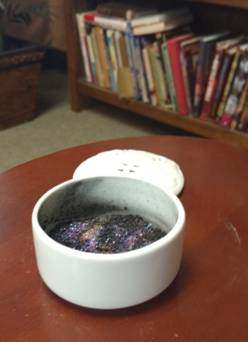 Churches that added glitter to their Ash Wednesday observances in an effort to be more inclusive are actually doing an injustice to the Gospel, the church, the country and even the gay community, according to the Rev. Mark Creech, executive director of the Christian Action League.

“All that glitters isn’t godly,” he said in response to reporting on the practice, which was embraced by a handful of North Carolina churches. “Rather than upholding the Word of God, they are denying its comprehensive inerrancy and divine authority in all matters of faith and practice. What is it to proclaim Christ died for all, while also denying the need for repentance from sexual sin? It is nothing but to betray Christ with a kiss just as Judas did. It is inclusivity and diversity gone amuck.”

Observed on the first day of Lent, the six-week period of repentance before Easter, Ash Wednesday often includes the use of ashes produced by the burning of the palm leaves from the previous year’s Palm Sunday celebrations. A priest or pastor dips his finger in the ashes and makes a cross on the parishioner’s forehead, urging them to “Repent, and believe in the Gospel,” or to “Remember that you are dust, and to dust you shall return.”

The Rev. Vance Haywood Jr., senior pastor of St. John’s Metropolitan Community Church in Raleigh, told the Raleigh News and Observer that his church offered glittery ashes, in addition to plain ones, to show unity with the LGBT community. Other churches chose to add purple or rainbow glitter as a nod to Parity, a New York-based group that supports LGBT pastors and encourages young people to “integrate their spiritual, gender and sexual identities.”

But Creech pointed out that the churches have accommodated the culture rather than witnessing to the truth handed down to them by Christ and the apostles.

“These churches have become seduced by the spirit of this present age. They are facilitating moral degeneration – sexual paganism,” he said.

While changes in the church may seem sudden, he said they are not.

“For quite some time, a number of mainline denominations abandoned the doctrine of an inerrant Bible. Much of the evangelical world also compromised the biblical teachings on divorce. The abandonment of biblical roles for men and women in the home and in the church would later follow,” Creech said. “What has evolved and matured is what Christian philosopher, Francis Schaeffer, called ‘equality without distinction,’ a theological position that inadvertently erases opposition to homosexuality. Schaefer rightly contended if we remove the distinctions between men and women, then what could possibly be wrong with homosexual relationships?”

Creech said that for years, people have reinterpreted Scripture to accommodate cultural influences, leaving us with churches that have embraced what God calls a moral atrocity.

“These churches and their leaders are spiritual whores, and, sadly, they will experience a severer judgment because rather than teach and defend the faith, they’ve perverted it as man-pleasers,” he said. “These false and misguided religious leaders should make us tremble. Faithful Christian affiliations are required by Scripture to discipline them in hopes of restoring them to the truth. If they won’t repent, they should be put out. They should be excommunicated.”