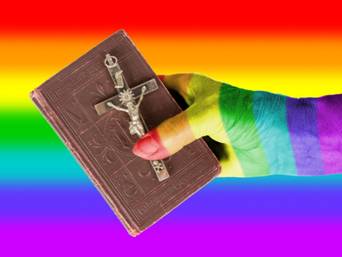 A left-wing religious organization that wants to meet with Southern Baptist leaders has a clear agenda: urge them to drop homosexuality as a sin.

The response from the Southern Baptists? Not gonna happen.

Southern Baptists are meeting June 13 and 14 in Phoenix, Arizona for their annual meeting, where the group Faith in America plans to protest.

FIA’s website states that its “ultimate goal” is to end religious teachings that “justify marginalizing and discriminating against others,” an obvious reference to homosexuals.

The organization has zeroed in on homeless LGBT youths, blaming religious teachings for pushing those youths out of religious households and onto the streets. Forty percent of homeless youths are LGBT youths, the group claims.

SBC spokesman Roger Oldham tells OneNewsNow it won’t be the first time a left-wing group has protested at the annual convention. The SBC urges its members to show kindness to such groups, including sharing the gospel message with them, he says.

Oldham says the SBC has responded to Faith in Action’s request for a meeting. It will be at a future date but not at the convention, he says.

North Carolina-based Faith in America was founded by homosexual businessman Mitchell Gold, whose namesake; upscale furniture business is also based there.

Despite the name Faith in America, a 1,700–word biography about Gold fails to mention any of his personal religious beliefs – other than bragging about his business success in the “Buckle of the Bible Belt.”

The website does mention scripture, recalling Jesus’ words to the woman about to be stoned for adultery as recorded in the Gospel of John.

“Neither do I condemn you,” Jesus told her. “Go and sin no more.”

Faith in America includes the first portion of that statement on its website – but predictably omits the second.

Oldham, meanwhile, doubts that any conversation with Gold and Faith in America will change what God says in the Bible about sin and homosexuality.

“We believe, as followers of Christ, the tenants of scripture and they cannot be negotiated away. They’re not adjusted through opinion polls,” he says. “But we do recognize that the Bible predicts as time goes on, fewer and fewer people will view its contents as reliable. We happen not to be in that group.”

This story was posted with permission of OneNewsNow.com

Mitchell Gold of Faith in America was an ardent opponent of HB 2, commonly referred to as ‘the bathroom law.” In a statement calling for the repeal of HB 2, Gold said that “religious beliefs that LGBT people are sinners and consequently immoral” were “outdated religious teachings” and “extremely harmful.”

His organization has advocated that any religious freedom argument at odds with transgender rights lacks any theological backing.

Faith in America has declared that “[c]onversion therapy is an act of violence against LGBT persons.”

Moreover, Faith in America has been known for attacking Rev. Mark Creech, executive director of the Christian Action League.

“Gold and his cohorts have embraced the ungodly and idolatrous practices of the day and given them a religious veneer in hopes of providing their sin with legitimacy. Faith in America is much like the response of the magicians when Moses cast his staff before Pharaoh and it became a great serpent. The magicians also cast down their staffs which turned to serpents, but Moses serpent devoured them. Counterfeit religion is ultimately swallowed up in the truth. Faith in America is a doomed counterfeit expression of faith.”