You are here: Home / Christian Action League / My View of the Eclipse 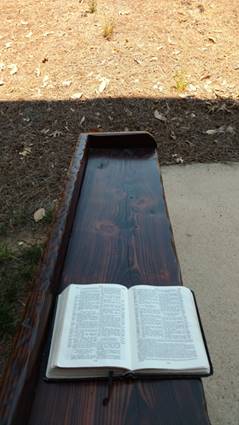 The first solar eclipse I ever witnessed was when I was a twelve-year-old boy in 1970.  There was so much concern about it damaging your eyes if you looked at it, I was ordered to stay inside to avoid the temptation. But I was allowed to watch the darkening of nature from the bench in front of the picture window of our home.

I remember quite distinctly sitting on that bench watching the confusion of the birds as they rushed to the eaves of our house to roost, thinking the day had abruptly ended.

That same bench is a part of the decorum of my office in Raleigh now. I took it outside to watch the Great American Eclipse of 2017. I resisted looking up, but I did notice that a flock of crows near me flew frantically about while nervously cawing to one another.

While sitting on that same bench, I thought of my Mother, and my Daddy who made that bench. I thought of my sister, Melissa. I thought of the years that have passed since I was a boy and the many blessings added to my life as this earth has traveled around the sun – Kim (my wife), Matt and Meredith (my two children), their spouses and all nine of the grandchildren.

But I mostly thought of Jesus and the day he died on the Cross for our sins, my sins to be more specific, and the way the earth shook and the sun was blackened, and the curtain to the holy of holies was torn in two. On that most significant day in human history, Christ reconciled believers to God.

Alone, while the sky dimmed, I read allowed the account of Christ’s crucifixion in Luke 23:33-49. I prayed for my country, our President, and for my family.

I cannot explain my feelings, but I have a sense of foreboding – that there are exceedingly difficult days ahead of America. While others watched the solar eclipse in celebratory ways, I did so with an ominous solemnity. As darkness today momentarily blocked out the light, I feel it was a sign, perfectly orchestrated by God’s Providence as a symbol – a symbol that the light of truth has been eclipsed in this country.

I do not despair because I know the light will prevail again. Still, what of the calamities that will befall us because of our suppression of the truth? What of the thousands, perhaps even millions of souls, swept into outer darkness in the interim?

Perhaps you say, “Aww please, c’mon, the solar eclipse, it’s all scientific.”  A friend of mine has said to me, “This eclipse could have been predicted a hundred years ago.” My response: “Indeed it could. But Providence is God’s predetermined course of all things with its concurrent circumstances from eternity past.”

This eclipse was unique and we have never seen America this morally depraved before.  The darkening of the sun in Scripture is associated with judgment.

Even if you don’t believe it was a sign, you have to admit that our behavior demonstrates that we are ripe for judgment.

Let me urge you to turn to Christ if you have never done so. Christian, let me urge you to join me in a spirit of contrition and repentance. May we put away every sin and seek God’s face for a revival of the light of God in Jesus Christ, our Lord.