You are here: Home / Christian Action League / My Former Pastor, My Roots, My Prayer to Finish Well 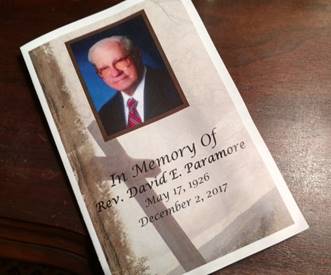 C.S. Lewis went to visit one of his young preacher friends and listen to him preach. Everything was great until the man reached the climax of his message. And he said, in so many words, “If you fail to believe in Jesus Christ, if you refuse to take him as your Lord, you will suffer grave eschatological ramifications.” The young fellow then went on to end his sermon. Lewis frowned. When Lewis had the occasion to talk with this young preacher about the conclusion of his message, he said, “Did you mean that those who refuse to receive the gospel message would go to hell?” “Well, yes,” said the young man. “Yes, that’s what I meant.” Lewis’ response was classic, “Then say that!”

Many years ago, up until I went away to college, Dr. David E. Paramore was my pastor at Bethel Free Will Baptist Church in Kinston, N.C. He was the kind of preacher that never seemed to have a problem with mincing his words. He said what he said and meant every word of it. He was not eloquent of speech. Still, he could be electrifying as a speaker. He was not formally trained, but he was full of wisdom. He was not draped in a clerical robe with an air of saccharine sweetness, but was plain and possessed a strong sense of moral authority. Nevertheless, his demeanor was never such that you didn’t sense his love and burden for the wrecked and wayward. He could be fatherly, kind, encouraging, and pastoral.

After giving my heart to the Savior, David Paramore baptized me in June of 1972. I was enamored with his infectious love for Jesus Christ and sharing the gospel – something by example he passed along to me.

One Sunday, during the evening worship service, he stood at the front of the church and said in so many words, “I’m not accustomed to doing things this way, but I believe God is calling someone here tonight to commit their life to full-time Christian ministry.” In that moment, it was as if God touched me on the shoulder and said, “He’s talking about you.”

At the tender age of 15, I went forward that evening and publicly committed my life to the proclamation of God’s Word.

Sometime after I was ordained to the Gospel Ministry and having a challenging pastorate, he told me something I’ve never forgotten. He encouraged me to proclaim the truth in and out of season and admonished: “Whenever you throw a rock in a pack of dogs, just remember the one that yelps is the one you hit.” Every faithful preacher needs to know this about his detractors.

I attended his Memorial Service today. He went home to be with the Lord on Saturday. As the Scripture says of Abraham’s passing in Genesis, “He breathed his last and died in a good old age, an old man and full of years, and was gathered to his people” (Gen. 25:8). I’m so happy for him! He was 91 years old.

When I walked into the church, the ushers urged me to sit in a section reserved for ministers. As Providence would have it, the seat was in the very same spot I used to sit in church and listen to “Mr. David.” As we sang the great hymns, my mind went back to those now gone from this life who used to sit in those pews. It seemed they were present too, if not, at the least, they were in me. They had been woven into the very fabric of my person. I felt them smiling, singing with us, and celebrating our amazing redemption in Christ.

David Paramore is representative of my spiritual roots – roots that run deep – not in hardened soil – not in rocky soil – not in thorny soil – but in the fruitful soil which produces a bountiful harvest to God’s glory.

May God comfort and strengthen the family of the man who was beloved and blessed so many, Dr. David E. Paramore