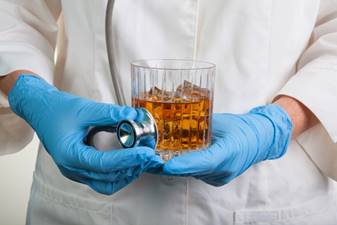 A new research review in the May 2017 issue of the Journal of Studies on Alcohol and Drugs has concluded that evidence suggesting that the commonly accepted thinking that moderate drinking provides protection from Coronary Heart Disease (CHD) may have been based on flawed data.

Past studies have indicated that adults who drink moderately have lower heart disease rates than non-drinkers. Thus there is the widespread belief that moderate alcohol consumption is a factor in heart health.

But this new report has analyzed 45 previous studies and has revealed flaws in that assumption. The researchers reported that “Our major conclusion is that the hypothesis that low-volume alcohol use can confer cardio-protection cannot be confirmed, because there remain plausible alternative explanations for the observed findings. First, there are substantial methodological problems with many of the studies comprising this observational literature, which is inherently open to unmeasured sources of bias and confounding. More specifically, 38 of the 45 identified studies contained either former and/or occasional drinker biases, and 16 used inadequate measures of typical daily alcohol consumption. The results confirmed the importance of separating former and occasional drinkers from the abstainer reference group as both these groups displayed significantly elevated CHD mortality risk, especially for men.”

In other words, former studies that classify individuals as “non-drinkers” may have included individuals who have actually been former drinkers who quit or cut down for health reasons, not solely life-long abstainers.

Senior adults who are healthy may be more likely to continue drinking because they do not have health issues that would preclude alcohol consumption. One of the co-researchers, Tim Stockwell, Ph.D., director of the Centre for Addictions Research at the University of Victoria, in British Columbia, Canada, said “We know that people generally cut down on drinking as they age, especially if they have health problems. People who continue to be moderate drinkers later in life are healthier,” Stockwell said. “They’re not sick, or taking medications that can interact with alcohol.”

“We can’t ‘prove’ it one way or the other, but we can say there are grounds for a healthy skepticism around the idea that moderate drinking is good for you. The notion that one or two drinks a day is doing us good may just be wishful thinking.”

The researchers concluded that “…there remain grounds for skepticism about the hypothesis that alcohol use can be cardio-protective, and we recommend that future prospective studies not only avoid biased abstainer reference groups but also take steps to minimize other forms of selection bias across the life course, including that from competing disease risks. We also recommend that level of former drinking is considered and that…both former and current drinkers are combined when estimating the effects of all levels and patterns of alcohol consumption on health.”

Note: The Journal of Studies on Alcohol and Drugs began in 1940 as the Quarterly Journal of Studies on Alcohol. It was founded by Howard W. Haggard, M.D., director of Yale University’s Laboratory of Applied Physiology. Dr. Haggard was a physiologist studying the effects of alcohol on the body, and he started the Journal as a way to publish the increasing amount of research on alcohol use, abuse, and treatment that emerged from Yale and other institutions in the years following the repeal of Prohibition in 1933. In addition to original research, the Journal also publishes abstracts summarizing other published documents dealing with alcohol. The Journal is available online to subscribers. http://www.jsad.com/page/about