You are here: Home / Alcohol / Low Alcohol Drinks: Emerging From a Cloud of Tobacco Smoke 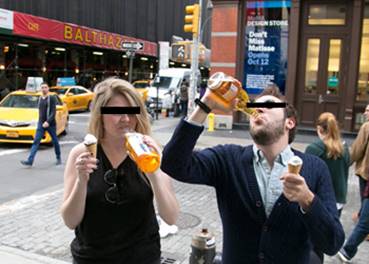 Big Alcohol would like you to know that it’s your friend. It does this in many ways. With advertisements featuring funny skits and catchy phrases. With philanthropic pushes that spend more on marketing than they earn for their recipients. And with grand language about reducing the harm of drinking, often backed by nothing but hot air. Prominent among the ideas floating on that hot air is low-alcohol beverages as a reduced harm product. This forms one pillar of alcohol giant AB InBev’s “Global Smart Drinking Goals.” But growing evidence shows selling low-alcohol products is smarter marketing than it is public health.

A Cambridge, UK, research team is trying to bring that concept down to earth. In a new study in BMC Public Health, they reviewed marketing messages surrounding reduced-alcohol beverages. If AB InBev and cohort were determined to replace “normal” alcohol-by-volume (ABV) beverages with their low-alcohol equivalents, then the researchers should have seen language urging consumers to drink these “near beers” and under 9% ABV wines instead of their regular fare. But Big Alcohol is too smart for that.

Instead, these modified products were marketed as being appropriate for every occasion. Often the ad copy urged consumers to drink them during lunchtime, nights in, or while outdoors. In other words, low-ABV drinks were for occasions when normally people would drink no alcohol at all. The authors caution, “they may be being marketed to replace soft drinks rather than alcohol products of regular strength.” In fact, “none of the marketing messages … mentioned drinking less or reducing alcohol harms.”

Other messages centered around health. Reduced alcohol drinks were sold on the basis of lower calories, or greater nutrition, or suitability for athletic events. However, drinking can be a liability for athletes, and alcohol itself is a poison.

“We expect the industry to trot out empty words about health and reducing harm,” said Carson Benowitz-Fredericks, Research Manager of Alcohol Justice. “But the entire concept may be bunk.”

“If we’ve learned anything from tobacco,” he added, “it might actually make harms worse.”

Tobacco industry documents show a successful, decades-long effort to fool consumers into believing that light cigarettes were healthier. In fact, they were designed to be just as addictive as regular cigarettes—and ended up being just as dangerous. More dangerously, the introduction of a “reduced harm” product both assuaged the fears of early smokers and gave inveterate smokers reasons not to quit. While replacing every beer with its low-ABV equivalent will undoubtedly lead someone to drink less alcohol, there is little to no data that this will happen. In fact, a consumer accustomed to a certain level of buzz may just drink twice as many. A consumer accustomed to a certain buzz and convinced they can drink low-ABV products whenever could end up consuming more than they would otherwise. Ubiquitous alcoholic beverages, regardless of the ABV, also twist social norms to make it harder to abstain, and easier for a young adult to start.

These harms may be theoretical, but so are the benefits. AB InBev’s rationale behind low-ABV products derives entirely from a single Health Policy article hypothesizing that reduced-alcohol products could reduce harm. One reference, and that paper itself by warns that “only an independent assessment will be able to identify the effects on harmful drinking.” That is the kind of assessment that never has, and never will, come from Big Alcohol.

This article was posted with the permission of Alcohol Justice.