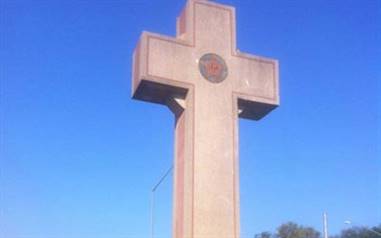 CAL Editor’s Note: North Carolina falls under the jurisdiction of the Fourth Circuit Court of Appeals. This week, the Fourth Circuit Court ruled that a cross on public land is unconstitutional. This decision could have a devastating effect on crosses displayed in public places or forums in the states of North Carolina, Maryland, Virginia, West Virginia, and South Carolina. In the article below, Bryan Fischer makes a solid case on the absurdity of the appeals court ruling.

A federal appeals court ruled this week that a cross on public land is a violation of the U.S. Constitution.

This ruling, not to put too fine a point on it, is absurd, unconstitutional, and represents an impeachable offense.

The 40-foot-tall Bladensburg Cross – which stands on a highway median right outside Washington, DC – has stood since 1925 as a memorial to the fallen U.S. soldiers of WWI. The 4th Circuit Court of Appeals in Richmond, Virginia, said that the cross, according to AP, “equates to government sponsorship of a particular religion.”

No, to “establish” a “religion” meant specifically and exclusively to select one specific Christian denomination, pass a law designating it as the official church of the United States, and compel Americans to support it with their own money.

The First Amendment was written only to restrain the actions of Congress, as its first words clearly state: “CONGRESS shall make no law…” Only Congress can violate the First Amendment’s establishment clause, and the only way Congress can do that is by passing a LAW that designates one Christian denomination as the official church of the nation and ordering people to give money to it.

If Congress doesn’t do that, it can do anything else it wants when it comes to religious expression.

Not only is Congress the only entity that can possibly violate the Establishment clause, it is also the only entity that can even possibly violate the Free Exercise clause. That clause flatly forbids CONGRESS (and by extension, the entire federal government) from “prohibiting the free exercise” of religion. This restriction applies to every branch of the federal government. The executive branch is not allowed to prohibit the free exercise of religion in any way and neither is the judicial branch.

This is critical to understand. If a three-judge panel prohibits the free exercise of religion, which this 4th Circuit panel has clearly done, then it is the COURT that is in violation of the Constitution, not the cross.

The 4th Circuit panel said the memorial “excessively entangles the government in religion” because the cross is the “core symbol of Christianity” and “breaches” the wall separating church and state.

But the First Amendment flatly forbids the government to interfere at all with the “free exercise” of religion in any way. In other words, when it comes to the public display of the cross, it’s none of the federal government’s business.

It’s not the memorial that “excessively entangles” the government in religion, it’s the 4th Circuit. The 4th Circuit is unconstitutionally entangling itself in religion by impermissibly interfering with its free exercise.

There is in truth a “wall of separation” between church and state, but the Court has its understanding of that wall exactly backwards. It is a wall, according to Jefferson, that insulates religious expression from the interference of the federal government. Jefferson told the Danbury Baptists that they did not need to worry about the federal government sticking its nose into religious affairs, because the Constitution had erected an impenetrable wall to keep the central government from meddling in matters of religious expression.

Contrary to popular belief, federal judges do not serve for life. According to the Constitution, they serve “during good behavior.” When judges exhibit bad behavior, they can and should be removed through impeachment. These judges, by turning the Constitution on its head and prohibiting the very thing – religious liberty – that the Constitution was crafted to protect, have committed an impeachable offense and have disqualified themselves from serving on the federal bench.

Perhaps it’s time to start impeaching these renegade, out-of-control judges while there are at least some crosses left to save. If we don’t stop activist judges, they won’t rest until every last cross has been removed from public view and reduced to rubble. We must not and cannot allow that to happen.

This op-ed was posted with permission.