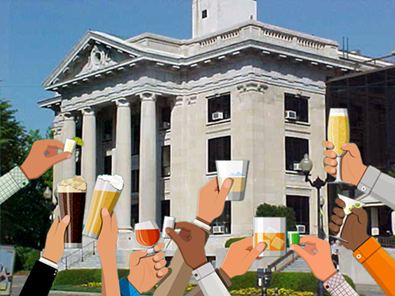 SMITHFIELD – Monday, Johnston County Commissioners approved a Brunch Ordinance by a margin of 5-2. The measure allows for alcohol sales in unincorporated areas of the county to begin at 10:00 a.m. on Sundays instead of noon.

Commissioners held a public hearing on the proposal last month but postponed their vote until this week.

North Carolina ABC Liquor stores are not open on Sundays.

Three persons spoke before Commissioners in opposition to the proposal. No one spoke in favor of it.

Jordon said Johnston County was a Christian-based community. “If we really are Christian based,” said Jordan, “then we have to honor the word of the Bible.”

Jordan added, “The Bible tells us the love of money is the root of all evil, not money, but the love of it. If we are going to lower the time from 12:00 to 10:00, then that’s just showing us that the love of money is more important than serving the Lord. The Lord has always told us to keep the Sabbath holy…We’ve already broken that….Why keep on antagonizing the Lord by allowing alcohol sales from 10 to12? As a Christian, I believe we should not do that.”

Jordan pointed out that the Commissioners’ meeting had opened with prayer. “We asked the Lord to bless us,” he said, “if we want his blessing then we need to do what he wants us to do in this situation.”

Kelton Hinton, Director of Missions for the Johnston Baptist Association and a resident of Princeton, spoke next.

Hinton said he was against the measure because of health and safety concerns. He cited a study that he had recently read in the British Medical Journal reporting Cirrhosis of the liver had increased by 65% from 1999 to 2016. The alarming thing from the report, said Hinton, was that they are finding the disease impacts more and more young people because of their binge drinking.

Hinton also drew attention to the much-publicized Opioid Crisis. He noted the problem was costing the state of North Carolina up to $1.3 billion annually. But he contended the Opioid Crisis pales in comparison to $6.8 billion in costs to the state resulting from alcohol abuse.

Hinton further noted studies showing that when alcohol sales are increased by as little as 2 hours on Sundays, it exacerbates alcohol-related problems.

“So the evidence is there if you are willing to look at it,” said Hinton. “Alcohol being such a pervasive and widely available drug for our people, it is inherently dangerous…and the best that we can do is control it and limit it. Studies have shown over and over and over again that when there are fewer outlets and limited times for sales, then the negative consequences go down.”

Dr. Mark Creech, executive director of the Christian Action League, and a resident of Kenly was the last to address the Board.

Creech had spoken in opposition to the measure during the Public hearing in July and was granted a request to speak a second time.

Creech reminded the Board that the law prohibiting Sunday alcohol sales before noon had been a long tradition in the state. He said its purpose was to show respect for churches that hadn’t finished their services before the noon hour. “Where is this respect now?” he asked. “Brunch ordinances are sensitive to business interests but insensitive to religion’s interests,” he asserted.

Creech cited a study titled, The Church vs. the Mall: What Happens When Religion Faces Increased Secular Competition from the National Bureau of Economic Research. He argued the study demonstrated that when states repeal their blue laws, church attendance falls, along with their contributions and spending for ministry.

“Granted, it is not the place of government to legislate church attendance, but there was a time when government was more supportive of religion’s efforts to produce the kind of morality necessary for sustaining a just and free people,” he said. “Sunday Brunch Ordinances diminish religion’s ability to flourish. To contend Sunday Brunch Ordinances will do nothing to impact religion’s influence negatively is to fail to understand religion or culture.”

During discussion by the Board on the proposal, Vice Chairman Ted Godwin said he couldn’t support the ordinance because he thought it would contribute to the overall erosion of family values.

Godwin said that he has a 15-year-old granddaughter and the people of her generation grow-up with a certain set of values endorsed by the community as being the norm.

“It’s totally different now than it was when I was a kid at 15. We’ve seen it in so many different things…and I just hate to see another erosion of what I consider our typical family values that have been expressed throughout the generations in Johnston County,” said Godwin.

Commissioner Cookie Pope said she felt the same as Vice Chairman Godwin on the issue. Pope said she respected the argument that passage of a Brunch Ordinance would provide parity between businesses in the city and those in the County. “But having a place in my church such as I do, I feel like that I would have to vote against this,” she said.

Commissioner Chad Stewart argued in favor of the measure saying that he and his family attend church on Sundays and sometimes they don’t. For him, it was a “matter of choice.”

Commissioner Allen Mims said his wife had attempted to buy alcohol at the grocery store on Sundays before the noon hour and was told she couldn’t. Mims said that would make her mad because it meant she would have to make an additional trip to the store. “So I’m just looking at it as a matter of convenience,” he said.

In a 5-2 vote, with Commissioners Godwin and Pope voting no, the measure passed.

After the meeting, Rev. Creech said the vote was disappointing, but it went as he anticipated.

“Commissioners were given sufficient, as well as superior arguments against the Brunch Bill, I thought. They had the information needed to make the right decision. They just didn’t,” said Creech. “In fact, I don’t think its hyperbole to say that when it comes to alcohol policy, our culture demonstrates the mentality of someone in a drunken stupor. We are unable to see straight. We are unable to navigate precisely. And respectfully, the vote taken today by the Commissioners is just another example of it.”