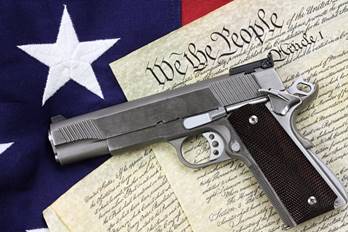 The tragic shooting in Texas this past Sunday has once again opened up the gun debate in America. It seems as if every time a deranged person seeks to do harm to others it is always the problem with the gun or guns. We never apply the gun debate to other areas of life of like danger. For instance, according to the Centers for Disease Control and Prevention, alcohol leads to 88,000 deaths each year in America. They further state that alcohol is responsible for 1 in 10 deaths among working-age adults between the ages of 20 to 64. Where is the same cry among the no-gun crowd that alcohol should be banned? According to the National Safety Council, 40,000 people died in motor vehicle crashes in 2016. The no-gun crowd certainty will not talk about banning automobiles.

First of all, let’s analyze gun control from the theological perspective. What motivates people to harm other people? Jesus has given us the answer: “For from within, out of the heart of men, proceed evil thoughts, adulteries, fornications, murders, thefts, covetousness, wickedness, deceit, lasciviousness, and evil eye, blasphemy, pride, foolishness: All these evil things come from within, and defile the man.” (Mark 7:21-23) Here, Jesus stated that the heart of man is wicked and that out of his heart he will produce “evil thoughts” and “murders”.

Again, we are told that “Their feet are swift to shed blood; Destruction and misery are in their ways;” (Romans 3:15-16)

A gun is a neutral item whose destination is only determined by the occupant thereof. If a person has a sinful heart and is filled with wickedness, his possibilities of harming others are increased with whatever weapon he chooses to use. The heart of man will determine how he will use a weapon or to what extent he will use it.

The problem with the human race is not found on the couch of a psychiatrist but within the heart of the human race as analyzed and scrutinized by our Creator in the pages of His Word!

Jesus, knowing that He would soon be leaving his disciples, prepared them to protect themselves during His absence. “Then said he unto them, But now, he that hath a purse, let him take it, and likewise his scrip and he that hath no sword, let him sell his garment, and buy one.” (Luke 22:36) Jesus said to sell an outward garment if necessary and buy a sword. He was preparing them to protect themselves during His absence.

Our forefathers, knowing something about the wickedness of the heart, provided the Second Amendment to protect us from those who would seek to do us harm.

George Washington said, “Firearms stand next in importance to the Constitution itself. They are the American people’s liberty teeth and keystone under independence–From the hour the pilgrims landed to the present day, events, occurrences and tendencies prove that to ensure peace, security and happiness, the rifle and pistol are equally indispensable–The very atmosphere of firearms anywhere restrains evil interference–They deserve a place of honor with all that’s good.”

Benjamin Franklin said, “Democracy is two wolves and a lamb voting on what to have for lunch. Liberty is a well-armed lamb contesting the vote.”

A gun in the hand is better than a cop on the phone. The truth is gun control is not about guns. It is about control. Criminals love gun control because it makes their jobs safer.

Dr. Ron Baity is the founder and pastor of Berean Baptist Church in Winston-Salem, N.C. He serves on the board of the North Carolina Christian School Association and is a chaplain for the Winston-Salem Police Department. He also serves as President of Return America.