First, athletes across the country took a knee during the national anthem to protest the mistreatment of minorities in America. For most, the action was deemed an improper venue for making their statement, and highly disrespectful to the nation’s flag which is a symbol of the patriotic ideals and spiritual qualities of its citizens.

Now the California chapter of the NAACP is advocating we discard the national anthem because it’s allegedly racist. The organization’s president Alice Huffman says, “The song is wrong, it shouldn’t have been there, we didn’t have it ‘til 1931, so it won’t kill us if it goes away.” Huffman says the protests at sports events are what led her to look at the lyrics and determine, “It’s racist; it doesn’t represent our community, it’s anti-black.” She believes that if we did away with the national anthem it could improve race relations.

Huffman’s contentions are based in a controversy surrounding the anthem’s third stanza – one most Americans know nothing about – one that’s rarely, if ever sung, as the opening to an official state or athletic occasion.

The stanza includes these lyrics: “Their blood has wash’d out their foul footsteps pollution / No refuge could save the hireling and slave / From the terror of flight or the gloom of the grave.”

Some historians argue these verses are a celebration of the death of two units of black American slaves who fought for the British in exchange for their freedom in the War of 1812. Francis Scott Key, who penned the national anthem, they say, was against abolishing slavery, and an owner of slaves who referred to blacks as an inferior people. The best that can be said of Key, it’s argued, is that as a Christian he advocated that Masters should treat their slaves with kindness.

The claim, therefore, is that the third stanza is reflective of Key’s racism and his belief that the blood of mercenaries and slaves who fought against America would wash away the pollution of an invading British army.

Still, other historians assert that when Key mentioned “slavery” he was actually referring to the British Navy’s practice of impressment, which was kidnapping American seaman and forcing them to fight on British man-of-war ships. This was a matter of utmost concern to Americans as one of the reasons for the War of 1812.

The word “hirelings” most likely referred to German Hessians who were mercenaries fighting for the British. Some add that the verses do reference slaves who fought for the British, but it doesn’t treat whites any different than blacks because the fourth stanza speaks of “freemen,” which would have encompassed both blacks and whites who fought for America.

Moreover, it’s said that Key was a man of contradictions that did own slaves but despised slave trafficking. He was known to have freed several slaves. And as a lawyer, he represented free of charge, both black freemen and slaves in court.

So, which is right? I think it’s impossible to know because Key didn’t specify one way or the other what he meant in the third stanza.

Nevertheless, there is one thing for which we can be certain. If we continue to look outside of ourselves, whether it be getting rid of the Confederate flag or monuments to heroes of the Old South, or doing away with the national anthem, the problems of racism will continue. Racism is a virus of the soul.

This week, I contacted my friend, Clarence Henderson, and asked his opinion about the movement to shed us of the national anthem. Henderson is a long-time civil rights activist, one the four young black men who bravely occupied one of the seats at a Greensboro Woolworth’s lunch counter in 1960. Henderson currently serves as the president of the North Carolina chapter of the Frederick Douglas Foundation.

Henderson said, “We as a country need to be more concerned about uniting America than dividing it. In the words of Dr. King, ‘Unless we learn to live together as brothers we will perish together as fools.’” 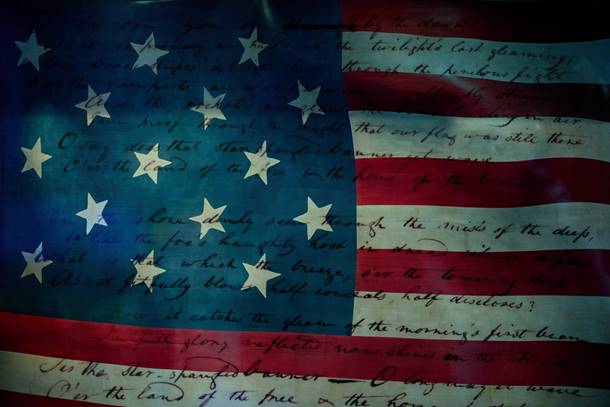 Henderson added that he believed the intent of the lyrics of the anthem was meant to inspire. “Unfortunately, we have become a country that finds racism in just about everything,” he said. “In order for America to continue to become a more united nation, we need to seek to resolve rather than create.”

I think it’s interesting the announcement to sacrifice the national anthem as an antidote to racism comes so close to the celebration of Dr. Billy Graham’s 99th birthday.

Graham spoke out against racism many years ago during the height of the civil rights movement and said, “I say today there is only one possible solution [to racism] and that is a vital experience with Christ on the part of all races. In Christ, the middle wall of partition is broken down, the Bible says. There is no Jew or Gentile, or black or white or yellow or red. We could be one great brotherhood in Christ. However, until we come to recognize him as the Prince of Peace, and receive his love in our hearts, the racial tensions will increase.”