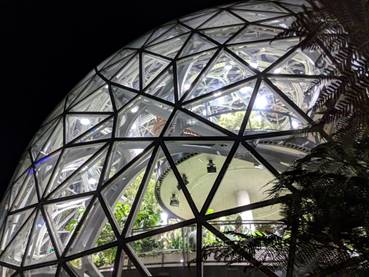 As the anticipation about where Amazon will choose to locate its much-coveted second headquarters (HQ2) grows, so does the pressure from gay rights advocates demanding that the company pick an “LGBT-friendly” location, which, they say, eliminates Raleigh.

Like 30 other states, North Carolina does not include special protections in its laws for sexual orientation and gender identity. Raleigh and 10 other locations on Amazon’s top-20 list are in nine of those 31 states.

The company has announced plans to hire 50,000 workers and spend $5 billion on the new headquarters, which it wants to locate in a business-friendly environment, with highly educated labor pools, strong transportation options and good quality of life. But leaders of the “No Gay? No Way!” campaign say that criteria is not enough. They have been running digital ads in Seattle, Wash., Amazon’s home city, and having planes with the “No Gay? No Way!” banner circle the headquarters. They also reject the idea that if Amazon located in a state without special LGBT protections, it could advocate for change from the inside.

This isn’t the first time that North Carolina has been in the cross-hairs of gay rights activists or the first time that they have twisted the arms of business leaders to try to keep companies out of the Tar Heel state. When the state Legislature pushed back against a Charlotte ordinance that would have allowed transgender individuals to use whatever bathroom they liked, the Human Rights Campaign pressured businesses to speak out against House Bill 2. Many did so to keep from getting a negative assessment in the powerful HRC’s Corporate Equality Index.

“While I am sure a handful of Fortune 1,000 corporate executives are personally supportive of HRC’s agenda, I fully expect others feel pressured and compelled to act in order to avoid getting a black mark beside their company’s name … and being targeted for boycotts and other forms of retaliation,” wrote John Rustin with the NC Family Policy Council at the time. “For a group that purports to support ‘tolerance,’ these ratings and pressure tactics seem far from accepting of other viewpoints.”

The Rev. Mark Creech, executive director of the Christian Action League, had a similar response to the latest LGBT push.

“I think North Carolinians would appreciate the jobs if HQ2 were to locate in the Triangle. What I don’t think our state’s citizens want are powerful business influences telling them that men should be allowed in women’s restrooms, locker rooms and showers,” he said.

“It’s these same kinds of businesses that gave North Carolina so much trouble over HB 2.”

He said that while many might be bending over backward to get Amazon HQ2 to come to the Triangle, if the company were to choose our state they might be as much a curse as a blessing.

Amazon was one of 53 companies who signed on to the HRC’s Supreme Court brief supporting a transgender boy’s battle against his school district over which bathrooms he could use. Early last year, the Supreme Court remanded the case, Gloucester County School Board v. Gavin Grimm, to the U.S. District Court, which had ruled in favor of the county after the school installed three single-use gender neutral restrooms to accommodate the student’s situation.

Creech pointed out that even as some business leaders push for states to make sexual orientation and gender identity (SOGI) specially protected classes, studies show that inserting SOGI clauses into state law not only does not guarantee greater economic growth, in fact the opposite is true. Seven out of the top 10 states for business as rated by Forbes do not have SOGI laws, nor do 9 out of 10 states rated tops for business by Chief Executive. Conversely, 9 of 10 states that Chief Executive labeled the worst for business do have SOGI laws as do all 10 of those given lowest business ratings by ALEC, the American Legislative Exchange Council.

While this does not mean that states with these types of laws always experience low economic growth, it does indicate that these classifications aren’t essential to economic growth.

In fact, an analysis by The Family Research Council shows that SOGI laws are not only unnecessary but that they increase government interference in the free market, mandate the employment of homosexual and transgender persons in inappropriate occupations, undermine the rights of business to set dress and grooming standards, violate privacy and can lead to costly lawsuits against businesses.

Ironically, Amazon faces a suit filed last summer by a transgender woman and her husband, who worked at one of the company’s warehouses in Kentucky, which does have SOGI laws.

The FRC goes as far as to consider such laws a “threat to free markets and freedom of conscience.” It is no wonder, the majority of states and the federal government do not include sexual orientation and gender identity in employment, housing, or public accommodation nondiscrimination laws.

As for Amazon, CNN reports that in the coming months, the company will “dive deeper” into the proposals from the 20 finalist cities to evaluate how they could accommodate Amazon’s hiring plans, benefit workers and the local community.