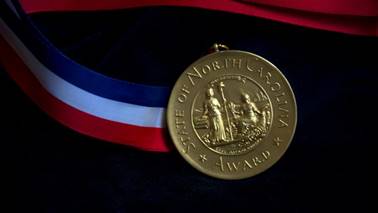 The awards are presented to persons who have made significant contributions to the state’s citizens or reputation as a place of culture, arts, science and public service.

Gov. Cooper in his introduction of Lynch said she fulfilled her role honorably as the nation’s chief lawyer.

Lynch said during her acceptance speech that North Carolina had given her both roots and wings. Her speech also highlighted the current divisions in our country, saying the state has always been reflective of whatever is taking place nationally, and North Carolina has a history of overcoming such conflict.

Dr. Mark Creech, executive director of the Christian Action League, however, took issue with Lynch as a recipient of the state’s high honor.

“Governor Cooper is a sly fox and any lauding by him is a low standard, if you ask me,” said Creech. “What would he know about serving ‘honorably’? And Lynch? North Carolina gave her ‘roots and wings,’ and in return she betrayed her state with a suit over HB 2 from the U.S. Department of Justice, seeking to impose on North Carolina the Obama Administration’s own interpretation of the Civil Rights Act. Like so many other citizens of our state, I don’t see her service as honorable in the slightest.”

North Carolinian Paul Chesser, who now writes for Liberty Headlines, says, “Recognition of Lynch – who was born in Greensboro and grew up in Durham – for public service comes as she is under scrutiny for several questionable judgments, dubious investigations (or failures to investigate), and radical social engineering via legal actions, while heading the U.S. Department of Justice under President Obama.”

In an article written by Chesser before the awards ceremony, Loretta Lynch, Under a Cloud, to be Honored for Public Service, Chesser list other controversies surrounding the former attorney general that go beyond HB 2 and the Tar Heel State.

Chesser cites Lynch’s secret meeting with former President Bill Clinton in a jet parked on the tarmac at Phoenix’s Sky Harbor Airport. “The meeting came at the height of attention on Hillary Clinton’s use of a private email server while Secretary of State under President Obama, during her pursuit of the Democratic presidential nomination. It occurred while the FBI was concluding its investigation of the email scandal and considering whether to bring charges, and the meeting also took place only hours before a release of a report about the Benghazi attacks,” he writes.

Chesser also points out the questionable decision under Lynch’s authority surrounding the sale of 20 percent of U.S. Uranium to a Russian company. Various new reports now say that an FBI informant has been prepared to provide information to Congress about the Uranium deal, but his attorney says that his client was threatened by the Justice Department if he talked. Some of the money for the deal allegedly got routed to the Clinton Foundation. The U.S. Department of Justice Department has now released the FBI informant from that order and will allow him to testify.

“Finally, Lynch’s tenure as attorney general is considered suspect by many conservatives, especially those who were targeted by the IRS for their ideology and saw their efforts to gain tax-exempt non-profit status either delayed or outright denied,” writes Chesser. “The IRS admitted wrongdoing last month in a settlement with the groups reached by the Trump Justice Department, but none of the agency’s personnel or leadership were terminated or faced consequences as a result.”

“I am incensed by Lynch’s honor!” added Creech. “If Lynch were in the military she would likely get a dishonorable discharge.”

“Her acceptance speech was full of noble pontifications about unity, inclusiveness, and moving forward together. But to me, her words are like the person who washes the windows of his house and thinks this will somehow make the inhabitants clean. Her words paint and ornament the exterior but leave the dwellers unhealthy and unholy. The outward cleansing, the high sounding words from Lynch, were but the gilding of the bars of a cage full of unclean birds among which she was a principal figure. They were but the whitewashing of a tomb full of dead men’s bones. I am tempted to take a knee every time I hear the names of Lynch and Cooper,” said Dr. Creech.

The North Carolina Awards have been presented to more than 250 people since 1964.