You are here: Home / Alcohol / Don’t Believe the Lie: Alcohol is NOT a Health Food. 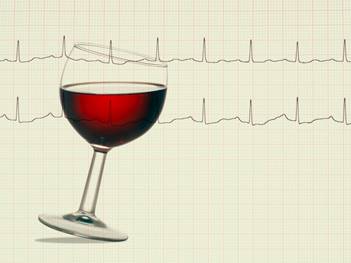 While biblical scholars debate whether it is biblically OK to drink alcohol, there is a widespread perception that it is good to drink alcohol for health reasons. Drinking red wine in moderation, and more recently alcohol, in general, has been advanced as something that can improve one’s health. The constant messaging from the alcohol industry has people feeling they must drink two glasses of wine a day to feel healthy. This is a dangerous myth.

At our clinics across the country, we have amassed the world’s largest database of functional brain scans relating to behavior, totaling more than 140,000 scans on patients from 120 countries. The scans leave no room for doubt—alcohol is toxic to the brain, even in small amounts. Just one glass of beer or wine per day can be directly toxic to brain function. The SPECT (Single Photon Emission Computed Tomography) scans of people who drink too much alcohol — more than three drinks a week — look toxic.

Alcohol use negatively affects the brain and body in a number of ways. It is associated with fatty liver disease, peripheral neuropathies (pain and tingling in hands, legs and feet), damage to neurons, especially those in the cerebellum, which is involved in physical and thought coordination, and mood. It interferes with the absorption of vitamin B-1, which predisposes people to serious cognitive problems. Alcohol decreases firing in the prefrontal cortex, the most human and thoughtful part of the brain. It also disrupts sleep.

Additionally, alcohol predisposes you to sugar abuse, stimulates your appetite, prolongs the time you sit during a meal and is associated with continued eating even though you feel full. Alcohol exerts substantial influence on the circulation in your pancreas, increasing the production of insulin, which can lead to low blood sugar levels, which worsens your decision-making.

And it gets worse. In 2015, the prestigious journal Lancet published a review of 115,000 subjects in which researchers found that although alcohol use decreased the risk of heart attacks, it increased the risk of cancer and physical injuries. Alcohol is a known carcinogen and associated with 5.8% of all cancer deaths. Jürgen Rehm, Ph.D., Director of the Social and Epidemiological Research Department at the Center for Addiction and Mental Health in Toronto, Ontario, Canada, wrote, “Very simply, the cancers that have been determined previously to be caused by alcohol have been confirmed. There is no discussion about whether alcohol causes these cancers. The fact that alcohol is a carcinogen has been clearly confirmed.”

Furthermore, alcohol affects the brain by reducing nerve cell firing; it blocks oxygen getting into the cell’s energy centers; and it reduces the effectiveness of many different types of neurotransmitters, especially those involved in learning and remembering. And a 2008 study appearing in the Archives of Neurology found that people who drink just one to seven drinks per week have smaller brains than nondrinkers, and those who have two or more drinks a day have even more brain shrinkage. When it comes to the brain, size matters!

Daniel Amen, MD is the founder of Amen Clinics, a double board-certified psychiatrist, neuroscientist, professor, and one of the world’s foremost experts on using brain-imaging technology to help optimize and treat his patients. A 10-time New York Times best-selling author, his newest book, Memory Rescue is available at bookstores everywhere. Follow him on Twitter @DocAmen.