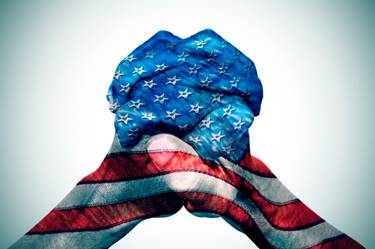 In the case Lund v. Rowan County, Nan Lund, Robert Voelker and Lisa Montag–Siegel, had filed a complaint against the commissioners, arguing the prayer practice was “coercive” – forcing those present to conform to the faith of the commissioners.

A Fourth Circuit three judge panel by a decision of 2-1 overturned a previous ruling by U.S. District Judge James Beaty in September of last year. Beatty had concluded that the method of elected officials praying sectarian prayers (prayers that reference Christianity or made in ‘Jesus’ name) failed to be nondiscriminatory. He said it entangled government with religion, and “over time establishes a pattern of prayers that tends to advance the Christian faith at the expense of any religious affiliation unrepresented by the majority.”

The Fourth Circuit panel, however, said, “Under the Supreme Court’s most recent decision explaining legislative prayer, Town of Greece v. Galloway…, “We find the Board’s legislative prayer practice constitutional and reverse the judgment of the district court…There is a clear line of precedent not only upholding the practice of legislative prayer but acknowledging the ways in which it can bring together citizens of all backgrounds and encourage them to participate in the workings of their government.”

The ruling by the panel was appealed and oral arguments were heard by all 15 members of the court in March of this year.

The 10-5 decision handed down on Friday reverted back to upholding the lower court’s decision, concluding the prayer practice by the commissioners is unconstitutional because, (1) the commissioners offered the prayers, (2) the vast majority of the prayers were Christian, (3) people at the meetings were encouraged to participate, and (4) members who had business with the county government often felt they were under pressure to join in the prayers – something allegedly inappropriate in a government setting.

Judge Harvie Wilkinson wrote for the majority in the full court’s decision.

Judge Wilkinson said, “The Establishment Clause does not permit a seat of government to wrap itself in a single faith. But here elected officials took up a ministerial function and led the political community in prayers that communicated exclusivity, leaving members of minority faiths unwilling participants or discomforted observers to the sectarian exercises of a religion to which they did not subscribe.”

Judge Paul Niemeyer dissented in the case and argued:

“The majority refuses to recognize the importance of religion – and of legislative prayer in particular to democracy and American civic life. And its decision to ‘pay close attention to the interplay between the various facets of the County’s prayer practice to assess whether it is too sectarian, unwisely inserts government into the role of regulating faith expression in precisely the way the Establishment Clause was intended to forbid.”

“Make no mistake, while the majority purports to have no problem with the idea of lawmaker-led legislative prayer in the abstract, it’s reasoning actually leaves no room for lawmakers to engage in the full panoply of legislative prayer practices to which Town of Greece grants constitutional protection. The lawmaker’s mere status as a prayer giver is viewed with immediate skepticism, and any sectarian content to his or her prayers is deemed to have an added coercive effect. Moreover, the majority refrains from providing any guidelines to when, if ever, lawmaker-led legislative prayers can meet their newly minted constitutional standards.”

Attorney’s in defense of the county said that commissioners had never forced anyone to participate, and since the district court’s decision that deemed the prayers unconstitutional, they had invited a volunteer chaplain to lead in prayer.

One of the co-counsels for the county, Alliance Defending Freedom’s Senior Counsel Brett Harvey, said regarding Friday’s decision: “All Americans, including public servants, should have the freedom to pray without being censored, just as the Supreme Court found only three years ago. The First Amendment affirms the liberty of Americans to pray according to their consciences before public meetings. For that reason, a 4th Circuit panel last year rightly upheld Rowan County’s prayer policy, which is clearly constitutional.”

Creech added that he hoped Rowan County Commissioners would proceed with an appeal to the United States Supreme Court. “These invocations are not an ‘establishment of religion’ as has been historically passed down to us. Because a public official offers a prayer within the context of his own faith in a government setting doesn’t mean the government endorses that faith or that people are required or coerced to pay it homage. This case could end up being a landmark case in the restoration of religious liberty. We should pray to this end. The Christian Action League urges the commissioners to stay the course.”

Harvey said that the county would consult with its legal counsel to consider asking the U.S. Supreme Court to review the case.

Like many other towns in America, the people of Greece, New York begin public meetings with a prayer. Asking God’s blessing on public meetings is a cherished American tradition that began more than 225 years ago. However in 2008, Americans United for Separation of Church and State sued the town of Greece on behalf of two local residents. They claimed the town violated the Constitution because many of the citizens who volunteered choose to say Christian prayers and demanded that the town censor the prayers to eliminate distinctly Christian prayers.  The U.S. Supreme Court upheld the town’s practice.  The Court affirmed that Americans remain free to deliver uncensored prayers at public meetings.  (Summary provided by Alliance Defending Freedom)