You are here: Home / Christian Action League / Churches Urged to Be Prepared in Evil Times 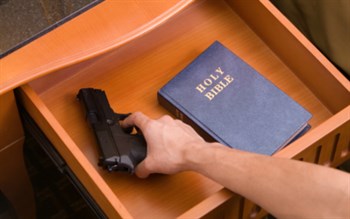 The shooting on Sunday morning in Sutherland Springs, Texas, has church leaders once again thinking about how to protect their worshippers from violence – and one pastor remembering a similar tragedy in his own church.

It was just before Christmas: Sunday, December 9, 2007. Pastor Brady Boyd had come to New Life Church in Colorado Springs just three months earlier, and was helping the church heal from a sex scandal involving its high-profile former pastor … when Boyd had to hold the most difficult press conference in his ministry life.

“I watched the events unfold from my second-floor office,” he shared during the press conference, “and within just a moment of hearing gunshots, the police were on the scene.”

That morning, 24-year-old Matthew Murray shot and killed two teenage sisters and wounded three others after a church service. A short time later, he was killed by an armed member of New Life’s security team. Boyd tells OneNewsNow that the security team played an invaluable role.

“If we had not had a plan for our security that day, we probably would have buried scores of people. There were about 600 people in our building,” he recalls.

Setting up a security plan has become an unwelcome necessity in today’s violent culture. Chuck Chadwick of National Organization of Church Security and Safety Management says things happen too quickly to rely on calling the police when the need arises.

“The New Life Church shooting was estimated to be three minutes,” reports Chadwick. “The shooter actually waited until the marked cars drove away. They were only a mile away when they got the first call –and [by the time they] came back, it was already over.”

He also says it’s best not to wing it – not to assign just anybody to handle security. “That’s the thing that I would warn churches about,” he shares. “[Just because] Bubba Joe’s got a gun [you can’t] make him in charge of security with absolutely no training – no tactical training or no financial responsibility also.”

This story was posted with permission from OneNewsNow.com