You are here: Home / Rev. Creech's Commentary / Christian: Should You Change Your Political Affiliation?

Brisson said in an interview with WECT that his constituents were rural and that he had been getting pressure from them for a few years to make the change. “I don’t have a lot in common with the Democratic Party right now because they have become so liberal,” he said.

NC GOP Chairman, Robin Hayes, said in a statement that Republicans welcomed Brisson’s conversion “to a political party that will better serve himself and his constituents.”

I couldn’t agree with Hayes more, not so much because I am a Republican, but because I know Rep. Bill Brisson. He has not only voted with Republicans on key issues such as the state’s budget, redistricting, and veto overrides, but he is a fine Christian man with strong Christian convictions. He’s solid on the social issues – really solid. In fact, I’ll venture to say that he will likely make a better Republican than some Republicans serving alongside him in the House.

I don’t claim to speak for Rep. Brisson, but I suspect, knowing his love for the Lord and his unflinching commitment to a righteous culture, it became increasingly difficult to stay in a political Party that supports policies far removed from Christian teachings. In fact, I personally believe a lot of Christians who are in the Democrat Party should consider changing their registration.

The question is somewhat like the one an elderly parishioner of mine asked me many years ago when I paid her a pastoral call. She said, “Pastor, can I still dip my snuff and go to heaven?” I replied, “You most certainly can, but you’ll have to go to hell to spit.” My attempt at humor wasn’t meant to say she would go to hell if she kept dipping. It was only a light-hearted way of trying to convey that her use of tobacco wasn’t consistent with a better Christian walk.

Wayne Grudem, in Politics According to the Bible, accurately describes the wide gap between Democratic and Republican principles which he says “involve a person’s entire worldview and deeper spiritual commitments.”

Here’s my summary of what Gruden says:

Grudem rightly contends the Bible’s emphasis is on individual freedom and a limited role for government. In my estimation, wealth redistribution by the state is a violation of the eighth commandment of God, “Thou shalt not steal.”

There is absolutely no support in orthodox Christianity for the wanton destruction of the unborn in our culture. Moreover, the commandments of the Lord are not negotiable, and the Bible always speaks of sex outside of marriage between a man and woman or same-sex relationships in a very negative way.

Grudem concludes that the differences in our political system, which is largely a two Party one, Democrats and Republicans, have great significance for the Christian. “These differences are not accidental,” he says, “but stem from differing convictions about several moral and theological issues.” 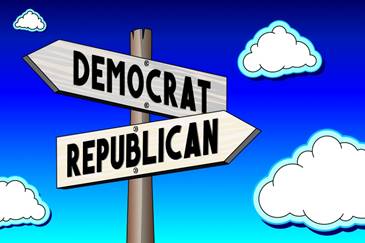 Although some of these issues overlap each other, Grudem is absolutely right.

Of course, an article of this nature is bound to result in some folks wrongly concluding Rev. Creech and the Christian Action League are just another arm of the Republican Party. Hardly! Those who know me are familiar with the way I can be appropriately critical of Republicans when I think they have departed from eternal verities.

Neither do I mean to suggest that Republicans are always better morally than Democrats.

And I don’t exclude the fact some good Christians choose to register as an Independent or with a third Party that they believe is closest to their biblical convictions.

What I am saying, however, is that Christians who are members of the Democrat Party and earnest about bringing their politics into line with a strong Christian worldview, may want to seriously consider changing their political affiliation.