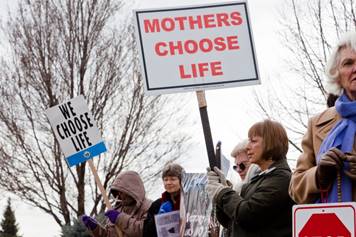 CHARLOTTE – A lawsuit filed against them may convince city officials in Charlotte, North Carolina, to respect the Constitution.

“The city of Charlotte and many of its officials are giving citations to pro-lifers based on the content of their signs,” she says. “They’re not issuing the same citations or putting the same restrictions on other signs, up to and including signs promoting abortion.”

As the attorney explains, that’s called viewpoint discrimination according to federal court rulings.

The legal organization contends one cannot violate constitutionally guaranteed free speech to challenge someone who might hold an opposing view. “One of the things that’s great about our country is that, regardless of your opinion, you have the right to speak,” the attorney says, “especially when it’s this peaceful message of life.”

Thomas More Law Center is asking for an injunction prohibiting Charlotte from enforcing its unconstitutional ordinance designed to silence pro-lifers.

This article first appeared on OneNewsNow.com, and was posted by the Christian Action League with permission.

“The leftists administration under Charlotte Mayor Jennifer Roberts was one of hostility toward religious liberty. The Charlotte ordinance, which precipitated the need for HB 2, was an attack on religious freedom and would have forced private businesses and even churches to allow men into women’s restrooms, locker rooms and showers. Now there’s this egregious exercise of viewpoint discrimination by the city under their new Mayor, Vi Lyles.

Citing pro-lifers based on the content of their signs is a blatant, in your face, affront to the First Amendment. Other signs are not being restricted in the same way – it’s just anything about abortion. The government has to abstain from regulating speech whenever the specific motivating ideology or opinion or perspective is the rationale for the restriction.”