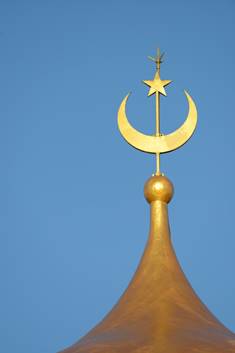 SMITHFIELD – It’s hard to say which is more disturbing — the transformation of what was once a Pentecostal church into the Islamic Center of Smithfield or the fact that area clergy showed up to celebrate the occasion.

“I cannot understand why Christian pastors would fawn over the start of a new mosque,” said the Rev. Mark Creech, executive director of the Christian Action League. “Why would Pentecostals sell the property they used – a property they had dedicated to God — for the practice of a false religion, especially one as dangerous as Islam?”

The joint service took place May 13 and involved readings from the Bible and the Quran. Episcopal Priest Jim Melynk told The News & Observer of Raleigh that it served as an “important statement that we take each other’s faith seriously.”

Smithfield businessman Ali Mohammad is an organizer of the mosque, which purchased the four-acre property that includes the church building and a home for $230,000. He said crosses removed from the church facade and steeple will be given to the pastors as a show of good faith.

While Creech doesn’t deny that followers of Islam have every right to worship as they see fit, his problem is with those who feel pressured to somehow equate Islam with Christianity.

“Religious liberty is a fundamental God-given right. We should indeed support it for other religions, even when they are egregiously in error,” Dr. Creech said. “But Christians have no obligation to throw out the welcome mat to that which damns the soul, and whose core doctrines do not support freedom of religion. In fact, Islam imprisons and/or murders those that disagree.”

Citing Robert Spencer’s “Islam Unveiled,” Creech admitted that all three monotheistic faiths (Judaism, Christianity and Islam) have been stained at various points throughout history with murder and mayhem. However, he said neither Judaism nor Christianity have any equivalents today to terrorist groups such as ISIS and al-Qaeda.

Islam, he said, “has a long, sordid, and predominant history of violence from ancient times to the present.”

“This so-called religion of peace is culpable in the murder of 22 people, including children, in Manchester, England, just this week,” Creech pointed out. “It was the worst terror attack England has ever experienced.”

He said everyone knows all adherents of Islam aren’t militant jihadist, but not everyone understands Islam itself is the “mother lode of dangerous religious ideas.”

“Plain and simple, violence and world domination are at the heart of its teachings,” Creech said.

Read Dr. Creech’s article: There, I Said It: Islam is the Enemy