Like the North Carolinians who passed HB 2, Texans are now considering legislation that would require individuals to use public facilities based on “biological sex.”  And, just as this common sense initiative has wrongly been vilified in the Tar Heel state, so it’s now being denigrated in the Lone Star state.

It’s bad enough when misguided citizens, those sunk deeply in the muck and mire of worldly values, come out against what’s clearly an irrevocable law of nature. But it’s nothing less than a scandal that reaches heaven itself when clergy do it in God’s name.

According to various news sources, Rev. S. David Wynn, the senior pastor of Agape Metropolitan Community Church in Fort Worth, along with hundreds of LGBTQ advocates, protested the Texas proposal outside of the state capitol building in Austin. Flanked by other Progressive ministers, Wynn, a female who identifies as a male, claimed the Texas “bathroom bill” is discriminatory against transgender persons, and that “God is transgender.”

We’ve become so accustomed to such perversions today, outrage is seemingly dead. The fact of the matter is, however, Wynn’s lifestyle is immoral, and her assertions nothing less than blasphemy!

Blasphemy, according to the Merriam-Webster Dictionary, means to insult or show “irreverence toward something considered sacred or inviolable.”  Unquestionably it’s insulting to God, and most irreverent, to attribute something corrupt to His holy, sacred, inviolable nature?

Dr. Michael Brown has sufficiently addressed claims like Wynn’s, noting that biblical teaching concerning God’s creation of male and female in His image, no more means God is transgender “than it teaches that God has sexual body parts or that He physically procreates.”

“Rather, it teaches that the fullness of male and female distinctives are found in Him, which does not mean that God is transgender; rather it means that He transcends gender. And so, while male pronouns are used to describe Him, and while He is called the heavenly Father (not Mother), He can be likened to a compassionate mother, because, as stated, as an eternal Spirit, He transcends gender categories,” says Brown.

“More importantly,” Brown adds, “when it comes to the bathroom controversies – in the beginning He created us as male and female and called us to procreate (“Be fruitful and multiply”), which only a distinct male and distinct female can do. There is no ambiguity here, nor is there ambiguity regarding male and female distinctives throughout the entire Bible.”

To distort these fundamentals of nature – God’s plan and order for humankind – is unconscionable. And then to say that “God is transgender” is the high sin of blasphemy.

Unlike some other cultures, which still have blasphemy laws, America’s First Amendment guarantees free speech. Neither do I argue for a return of blasphemy laws in any form. But if one should question just how terrible these sins are in the sight of God, then it should be noted that in the Israeli economy of Old Testament times, both sexual perversion and blasphemy were worthy of death by stoning.

Fortunately, in the current dispensation, the gospel of grace and the remission of sins are revealed in Jesus Christ: and therefore our Savior has set aside these laws. Nevertheless, even if those who are unrepentant profane the name of the Lord and escape the punishment of men, the Lord God will not allow them to escape his own righteous judgements.

Since the passage of North Carolina’s HB 2, commonly called “the bathroom law,” which prohibits men from entering women’s restrooms, locker rooms and showers, clergy like Wynn and those in Texas, have lined up against the new statute.

Not only has this angered me with a zeal for the holiness of God’s name, but it has also broken my heart at the terrible downward slide evident in our churches.

Kenneth W. Osbeck, in 101 Hymn Stories, gives this account, which in some respects is relevant.

Osbeck says that Robert Robinson was saved out of a grossly sinful and godless background through the preaching of George Whitfield during the eighteenth century. While still in his early twenties, in 1758, Robinson put into print his testimony which we know today in the words of that great hymn, “Come, Thou fount of every blessing, Tune my heart to sing Thy grace; Streams of mercy, never ceasing. Call for songs of loudest praise. Teach me some melodious sonnet, Sung by flaming tongues above; Praise His name – I’m fixed upon it – Name of God’s redeeming love.” 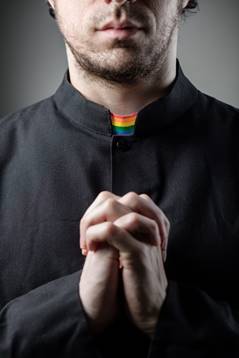 Yet, unknown to many, Robinson defected from the faith.  He left the claims of Christ and lived quite carnally, until one day he caught a ride on a stagecoach occupied by a woman whose face was buried in a book. She didn’t know Robinson, nor did he know her. But she began to read aloud a poem that she was fixated upon, and said to him, the stranger, “Listen to this, ‘Come, Thou fount of every blessing, Tune my heart to sing Thy grace; Streams of mercy, never ceasing, Call for songs of loudest praise.’” Robinson sat there quietly, surrounded by guilt.

And then she got to the stanza, “Prone to wander, Lord, I feel it, Prone to leave the God I love; Here’s my heart, O take and seal it; Seal it for Thy courts above.”

Robinson then protested, “Stop! Stop! I am the poor, unhappy man who composed that verse many years ago. I would give a thousand worlds to enjoy the feelings I then had.”

I too would “give a thousand worlds” to see many of the mainline churches, and other Christian denominational groups who have wandered away, repent of their apostasy and carnality, return to sound doctrine, and stop their blasphemies.

Clergy such as Wynn aren’t worthy to be celebrated, but instead should be disciplined by the church in the hope of bringing them to true faith in Christ or reclaiming them.  But under their current state, they are nothing more than blasphemous religious warps.