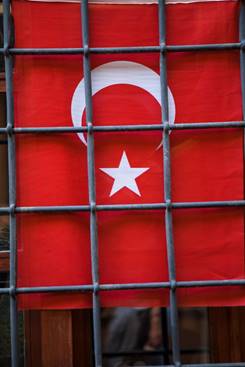 WASHINGTON, D.C. – The trial of Pastor Andrew Brunson, from Black Mountain, was continued for a second time on Monday.

During the hearing, two unknown, secret witnesses testified against him while a 3 judge panel rejected his request for several witnesses to testify on his behalf.

Brunson denies all the charges against him and says that they are “shameful and disgusting.” The hearing resulted in a postponement, with the next hearing set for July 18th.

Brunson, a missionary in Turkey for more than 20 years, has been wrongly imprisoned by Turkish officials who charged him with acts of espionage and terrorism.

But North Carolina U.S. Sen. Thom Tillis says the only thing Brunson is actually “guilty of is being a Christian and trying to bring a Christian message to those who want to hear it.” Various watchdog groups contend the same, arguing the charges against the pastor are bogus and that he is being used as a form of “hostage diplomacy” to secure certain objectives from the United States.

More specifically, Turkish President Recep Tayyip Erdogan is demanding that America exchange Islamic cleric Fethullah Gulen for Brunson. Gulen, who lives in Pennsylvania, is being blamed for spearheading a coup attempt in 2016. Gulen says the allegations are false and that President Erdogan is an “oppressor.”

This week the Christian Post (CP) reported that while the trial is still going on, new details have emerged describing the manner in which Brunson is being mocked for his faith in an overcrowded cell.

Cary Hughes, the lead pastor of Risen Life Church in Melbourne, Florida, claims in a desiringGod.org article that a friend of his has stayed in contact with Brunson’s wife, Norine.

“For the most part of his prison time, he has been in an overcrowded cell, being mocked by fellow prisoners who persistently ridicule him for his love for Jesus,” writes Hughes. “The room is intended for eight people – and it houses 22.”

The CP also reported that Hughes says Brunson has written a song while in prison where he speaks of his unswerving devotion to the Lord during a very trying time.

Hughes says Christians should sing the song in worship to Christ and in prayer for Brunson as his trial continues.

In a statement on Monday from Sen. Tillis’s office, Tillis promised:

“America will not stop fighting for Pastor Andrew Brunson’s release, and we will continue to send him our prayers. Today’s decision prolongs the Turkish government’s unjust 577-day detention of Pastor Brunson, and it’s disturbing that his request to have witnesses speak on his behalf at the next hearing was denied, showing once again that this is a kangaroo court.

“This entire ordeal has been a nightmare for Pastor Brunson’s family and is incomprehensible considering the longstanding strategic partnership between the United States and Turkey. That partnership is now severely strained in-part because of the Turkish government’s persecution of law-abiding American citizens.”

On America’s Newsroom, Tillis said the American government will continue to ramp up the pressure on Turkey. He explained that Turkey is a NATO ally. 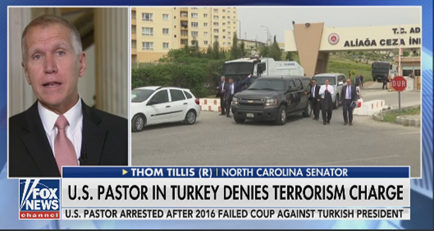 “We have an air base there. We have a very tight relationship with them in terms of the manufacturing of the Joint Strike Fighter. We’ve got to rethink our relationship with Turkey if this is how they are going to treat American citizens as a NATO ally. Its unheard of among NATO allies to treat people this way,” said Tillis.

Tillis has visited Brunson in Turkey twice, including attending his first trial hearing on April 16.

Sen. Tillis also recently spoke on the Senate floor about Brunson’s wrongful imprisonment, detailing the bogus nature of the accusations made against him.

Senators Tillis and Jeanne Shaheen (D-NH) in mid-April led a bipartisan letter signed by 66 Senators to President Erdogan calling for Brunson’s release and introduced legislation with Senator James Lankford (R-OK) to prevent the transfer of F-35 Joint Strike Fighter aircraft to Turkey until Brunson is released.

The Christian Action League has weekly discussions with Tillis’ office about Brunson.

“I just urge my fellow brothers and sisters in Christ to keep earnestly praying,” said Rev. Mark Creech, executive director of the Christian Action League. “Pray for the State Department. Pray for Sen. Tillis. Pray for Pastor Brunson and his family. Pray for Pastor Brunson’s church in Turkey. Pray for Christians in Turkey who are suffering from the decline of personal freedom and religious liberty in that country. The Trump administration, our U.S. Senator, and others are doing everything they can to get Pastor Brunson released. Let’s do our part by praying, praying, praying, and praying.”