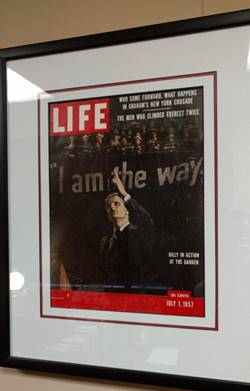 Billy Graham has passed. He was 99 years-old. We knew it wouldn’t be long before he would be face to face with the One whom he sought to faithfully represent. Now he is in heaven with his Lord. We mourn but also rejoice at his home-going.

A speech teacher was once asked what it would take to be a good preacher. She replied, “Fill your mouth with marbles and practice speaking. Take the marbles out of your mouth one by one; when you lose all your marbles, then you’ll be a preacher.” This seems to be a common perception, although I believe it’s a misguided one, of most evangelical preachers today. But no one could seriously make such a claim against Graham.

Graham proclaimed the unadulterated Gospel of Jesus Christ with incredible simplicity and clarity. He spoke with profound wisdom on so many subjects. His remarks were always thoroughly biblical.

In the coming days, many will likely laud Graham as a great unifier. He was, but not at the expense of truth. Graham also understood the offense of the Cross of Jesus Christ. He once said, “If you take a stand [for God] and mean it, you may suffer…Some of your friends will drift away. They don’t want to be with people like you. You speak to their conscience. They feel uncomfortable in your presence because you live for God.”

Even newspapers like USA Today claim that Franklin Graham, his son, “has swayed from his father’s message, leaving a mixed legacy for the Graham name.” That’s nonsense! Franklin Graham is preaching essentially nothing different than what his father did over the course of sixty years of ministry.

I suggest what made Graham different than so many in his field was his impeccable humility and sincerity. All who knew him would testify that he was without guile. Anyone who ever heard him preach sensed that he was real. He not only spoke to us of Christ, but he also showed him to us. He was firm in the truth but full of love, grace, and mercy.

I never had the privilege of meeting Dr. Graham. But hanging on the wall of my office is a July 1, 1957 edition of Life magazine with Billy Graham on the cover preaching at Madison Square Garden. Danny Lotz, the late husband of Anne Graham Lotz, Graham’s daughter, got the great evangelist to sign the bottom of the magazine’s cover for me. I cherish it.

Nevertheless, it is not a man’s signature on a piece of paper that has any significance. It is his signature on life – his family – his community – his state and nation – and as it was in Graham’s case – the whole world. And what was it that Graham signed? It was in bold letters this: Jesus Christ is Lord!