His mother was born in 1667, and his maternal grandfather was one of the first settlers of New England. His father owned a small business making candles and soaps. His family life was quite simple with an income just enough to support thirteen children.

This American statesman, printer, and inventor helped to draft the U.S. Constitution and signed the Declaration of Independence. In his Memoir, he doesn’t say much about his beloved mother, but it’s quite clear he deeply loved and respected her. Perhaps the most important thing he ever said about his mother was in the epitaph he wrote for the headstone of both his parents.

Josiah Franklin and Abiah, his wife lie here interred.
They lived lovingly together in wedlock
Fifty-five years.
Without an estate, or any gainful employment
By constant labor and industry
With God’s blessing
They maintained a large family comfortably
And brought up thirteen children
And seven grandchildren reputably.
From this instance, reader,
Be encouraged to diligence in thy calling
And distrust not Providence,
He was a pious and discreet man,
She a discreet and virtuous woman.

Benjamin Franklin is renowned for his considerable wisdom. So much of what he said is woven into the fabric of Americana. Most of us have heard many of his sayings, but we might not have known their origin.

It was Benjamin Franklin who said:

“Early to bed and early to rise makes a man healthy, wealthy and wise.”

“By failing to prepare, you are preparing to fail.”

“God helps those who help themselves.”

These are just a few of the better-known ones.

Franklin’s name is also synonymous with liberty and freedom.

“They who can give up essential liberty to obtain a little temporary safety deserve neither liberty nor safety,” said Franklin.

Or what about this word from the man who helped establish liberty not only for this country but for much of the world: “Rebellion against tyrants is obedience to God.”

Although there are exceptions to the rule, generally it’s true that “apples don’t fall far from the tree.”  You don’t get great men without great parenting, and great people honor their parents.

Soon after the nation of Israel was delivered from slavery in Egypt, the Lord gave them the Ten Commandments.

“Never entertain the shallow notion that Moses was a preacher with ten suggestions for people who might want to be religious. He was the leader of a brand-new nation of people who were free for the first time in their lives. In the very positive preamble to the Ten Commandments, God said, ‘I made you free. I want you to be free. Now here are ten principles which must be obeyed if you are to keep on being free.”

Say what you will, but this commandment has to do with national security. It’s not a tremendous economy, military, educational system, or anything else that keeps a nation free. Liberty can only be sustained by character.

The Great Wall of China was constructed over 5,500 miles and made-up of mighty stones and brick to keep invaders out. No one, the Chinese thought, would ever be able to penetrate that wall. Yet over and again the enemy marched through because the gatekeepers could be bribed. 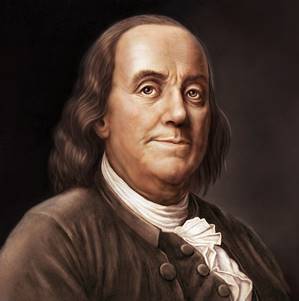 A strong, impenetrable nation is made from strong homes. These are the brick and stone that truly create a Great Wall that not only keep out invaders, but also extinguish the enemies from within – enemies unawares.

It’s a people who give honor and respect to their mothers and fathers throughout childhood and into adulthood who also become an honorable and respectable people. They become a shining city on a hill for whole the world to see.

“Only a virtuous people are capable of freedom,” said Franklin. “As nations become corrupt and vicious, they have more need of masters.”  No doubt this is also the reason Franklin in his wisdom commended the study of the Bible in every house as a “principle support of virtue, morality, and civil liberty.”

And what does the Bible say? It says, “Honor thy father and thy mother, that thy days may be prolonged in the land which the Lord thy God giveth thee” (Exodus 20:12).

Some of the information regarding Benjamin Franklin’s family life was taken from “Mothers: 100 Mothers of the Famous and the Infamous,” Paddington Press LTD, 1976