You are here: Home / Christian Action League / Belk Stores: For Whom the Bells Toll 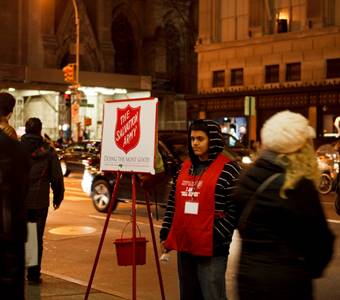 North Carolina-born Belk’s department store chain found itself in a kettle of hot water with customers earlier this week when it announced that Salvation Army bell ringers and their kettles wouldn’t be welcome at Belk store entrances this year.

In an official statement, the company said instead it would be focusing on a “social impact program” launched by Habitat for Humanity International.  Their goal would be to raise $600,000 for its “Home for the Holidays” campaign to build houses for the needy.

The backlash to that decision, however, came when Fox News and radio talk show host, Todd Starnes, announced Belk’s new policy to his listeners, saying,  “Certainly, Habitat for Humanity is a noble effort — but what harm is there in allowing the Salvation Army to set up kettles outside the department stores?”

The Salvation Army projected that Belk’s decision would cost them up to one million dollars in donation losses.

Within hours of the public receiving this information, it wasn’t bells but alarms ringing across Belk’s website and social media as shoppers clamored for the store to reconsider.

One concerned shopper touted the charity as being “one of the most trustworthy organizations out there and they don’t waste donations on employees and perks.”

In response, the company quickly relented, reversing the death knell it had rung for the beloved charity.

The reversal comes as a relief to many who regard the familiar sight of jovial volunteers collecting cash donations at Christmas time – a tradition they would have dearly missed.  Worse still, the Salvation Army would have missed the tremendous boost to its operations that the Kettle Campaign generates each holiday season.

“It’s a huge impact for us,” Dolby reportedly told the Todd Starnes Show. “Those funds go to operate Christmas programs serving tens of thousands of kids,” in addition to the operating costs of shelters, youth programs, addiction and treatment centers.

Fortunately, this year, the 80-year old tradition of red-apron-wearing bell ringers standing astride a red kettle outside a Belk department store is set to continue. They’ll be there as they’ve always been to receive the loose change tossed in by those who are willing to part with it on behalf of the needy.

Yes, thanks to the impassioned pleas of an outraged and vocal public, the Salvation Army will be there with bells on.