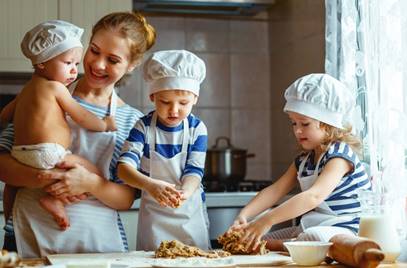 Pastor and radio Bible teacher, Chuck Swindoll, once shared a story about a good friend who was raised by a godly pastor’s wife. The friend said his mother used to rock him to sleep, not by singing little ditties and lullabies, but by singing to him the great hymns of the faith. He said he could remember quite well his mother leaning over the crib and singing, “A Mighty Fortress is our God”; “And Can it Be?”; “More Love to Thee, O Christ”; “My Jesus I Love thee”; “Come Thou Fount of Every Blessing.” She sang the deep songs. And he said, “I remember. I remember those hymns. In fact,” he said, “when I got into church, I had heard and learned most of the hymns.” Swindoll added that this young man’s mother had made an investment in his life that would always be with him.

A cartoon, from several years ago, shows a baby kangaroo peeping out of its pouch. The caption underneath read, “His mother determines his point of view.”

The virtuous things we learn at home are bonds that stay with us throughout life.

Laura E. Richards beautifully makes this point in The Apron String, where she writes:

“Once upon a time a boy played about the house, running by his mother’s side; and as he was very little, his mother tied him to the string of her apron.

“‘Now,’ she said, ‘when you stumble, you can pull yourself up by the apron-string, and so you will not fall.’

“The boy did that, and all went well, and the mother sang at her work.

“By and by the boy grew so tall that his head came above the window-sill, and looking through the window, he saw far away green trees waving, and a flowing river that flashed in the sun, and rising above all, blue peaks of mountains.

But the mother said, ‘Not yet, my child! Only yesterday you stumbled and would have fallen but for the apron-string. Wait yet a little, till you are stronger.’

So the boy waited and all went as before, and the mother sang at her work.

But one day the boy found the door of the house standing open, for it was spring weather. He stood on the threshold and looked across the valley, and saw the green trees waving, and the swift-flowing river with the sun flashing on it, and the blue mountains rising beyond. And this time he heard the voice of the river calling, and it said ‘Come!’

Then the boy started forward, and as he started, the string of the apron broke.

“‘Oh! How weak my mother’s apron-string is!’ cried the boy; and he ran out into the world, with the broken string hanging beside him.

“The mother gathered up the other end of the string and put it in her bosom, and went about her work again, but she sang no more.

“The boy ran on and on, rejoicing in his freedom, and in the fresh air and the morning sun. He crossed the valley and began to climb the foothills among which the river flowed swiftly, among rocks and cliffs. Now it was easy climbing, and again it was steep and craggy, but always he looked upward at the blue peaks beyond and always the voice of the river was in his ears, saying ‘Come!’

By and by he came to the brink of a precipice, over which the river dashed in a cataract, foaming and flashing, and sending up clouds of silver spray. The spray filled his eyes so that he did not see his footing clearly; he grew dizzy, stumbled, and fell. But as he fell, something about him caught on a point of rock at the precipice-edge, and held him, so that he hung dangling over the abyss; and when he put his hand to see what held him, he found that it was the broken string of the apron, which still hung by his side.

“‘Oh! How strong my mother’s apron string is!’ said the boy. And he drew himself up by it, and stood firm on his feet, and went on climbing toward the blue peaks of the mountains.”

The Scriptures instruct, “Train up a child in the way he should go: and when he is old, he will not depart from it” (Proverbs 22:6). Contrary to the interpretation of some, this text isn’t an absolute promise that whenever children are raised right, if they wander, they will always return. It’s unfortunate, but the Bible, as well as experience, demonstrates that good parenting doesn’t always result in good children. Children are not like machines that can be programmed, but instead they are moral agents who can choose either right or wrong.

But what the text does promise is that when godly values are passed along to children, this contribution to their lives never leaves them. It remains inside of them, constantly beckoning and pointing them to the right paths. It’s an apron-string by which they may at any point draw themselves up, saving them from the treacherous terrain of life, even the loss of their own souls.

Nothing, absolutely nothing, can ever substitute for loving, godly parental leadership in the early development of children. And, as the poet William Ross Wallace so eloquently said it, “The hand that rocks the cradle is the hand that rules the world.”